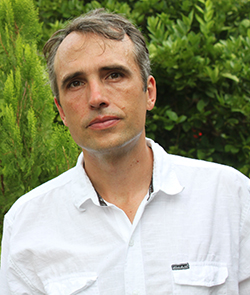 Daniel Griffin was born in Kingston, Ontario, and has lived in Canada, the United States, Mexico, the UK, France, New Zealand, India and Guatemala where he met his wife Kimberly Longenecker. He attended Queen’s University and received an MFA from UBC. His short story collection Stopping for Strangers was a finalist for the Danuta Gleed Award. He and his wife live in Victoria, BC, with their three children, a cat and a recently adopted dog from the family’s time in southern Mexico.

I’m not a writer but a rewriter. Getting the first draft down is just the beginning. When I tell this to people who are just starting to write fiction, I think they’re relieved to hear it. No need to worry if your writing is crap, in fact, knowing it’s crap is a good thing. It’s the first step towards fixing it. You only need to worry if you can’t see that your writing is crap. Then you can’t rewrite it. If you can’t see the problems, you can’t fix them.