Two Roads Home is a fast-paced story about the power of resistance, the fine line between activism and terrorism, and what happens when things go too far.

It is 1993 on Vancouver Island. A group of idealistic environmental activists, convinced their peaceful protests have been in vain, turn to sabotage. But in a single night everything they’ve worked for goes terribly wrong: a security guard arrives just as the group sets off an explosion at a logging company warehouse.

The novel follows these activists as their lives — and their cause — spiral out of control. Pete, who set the bomb, heads off the grid where he discovers a vibrant community of squatters who have been affected by the explosion in unexpected ways. Meanwhile, Pete’s mother is determined to track him down in hopes she can help clear his name.

In Two Roads Home, Daniel Griffin deftly re-imagines history: what if, instead of the peaceful anti-logging protests of the 1990s, things had gone too far? How far is too far, when it comes to protesting injustice? And what happens when that line is crossed?

Rettung is now out: the German edition of Two Roads Home 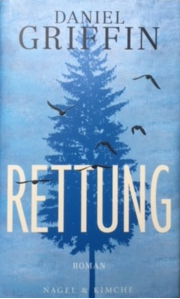 Get Your Road Home

Get your copy at

At your local independent bookstore.